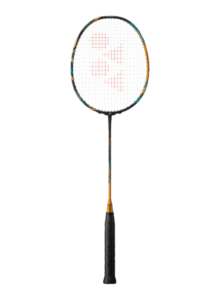 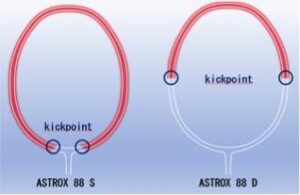 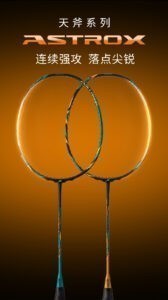 The popular doubles-concept racquets, ASTROX 88 S and ASTROX 88 D, will be reintroduced in March 2021 with new innovations and materials crafted for enhanced performance. ASTROX 88 S PRO and ASTROX 88 D PRO are designed to complement the evolving, faster style of doubles play, which requires even faster takebacks for continuous powerful attack shots. The release of the PRO will be accompanied by affordable models ASTROX 88S/D TOUR and GAME, designed and crafted with the same performance concept.

New advancements are made through the introduction of the VOLUME CUT RESIN, a groundbreaking resin that provides powerful adhesion with less material and weight. This resin is highly versatile in that it can increase durability and strength or reduce weight without compromising strength.

The ASTROX series are distinguished by the Rotational Generator System, our intricate weight distribution technology designed with the counterbalance theory that allows head-heavy racquets to recover faster between shots. By employing the VOLUME CUT RESIN, the new 88 S/D models have a further refined Rotational Generator System where intricate weight distribution can be taken to the next level.

Improvements*1 from the VOLUME CUT RESIN can also be seen in the frame and grommets.  The frame structure is evolved with a larger sweet spot made possible by the strength-reinforced Isometric head shape. The grommets are improved with a new pattern that uses larger, strategically-placed grommets, a technology that allows more string movement at impact and ultimately increasing shuttle hold for assertive shot-making. The 88 S models, designed for front-court players, will have a longer shuttle hold for precise net control, and the 88 D models, designed for back-court players, will balance repulsion and shuttle hold for maximum power.

Introducing the new ASTROX 88 D racquet with Rotational Generator System. The counter-balanced head adapts to each shot, helping you to control the drive and attack the opposition with increased acceleration, steeper angle, and power on the smash.

Making the whole frame flexible allows the“ASTROX 88 S” to hold the shuttlecock for accurate control, while the“ASTROX 88 D” has more flex in the upper part of the frame transmitting maximum power to the shuttlecock to break through the opponents. In addition, the overall length of the“88 S” is only 5mm longer, which enhances both accuracy and power while the“88 D” is 10 mm longer to provide powerful attacks.

NANOMETRIC* improves the bonding strength between the carbon fibers enabling us to take racquet shaft construction to another level. By reducing the amount of carbon in the shaft to make it 60%* thinner than a conventional racquet whilst retaining stiffness, YONEX has created a revolutionary lightweight racquet with lightning head speed and control.

*NANOMETRIC is the new material that applies the NANOALLOYTM Technology of Toray Industries, Inc.

The square-shaped ISOMETRIC frame shape is designed to keep vertical strings at a similar length, as well as the horizontal strings to produce an expanded sweet spot in all directions.

‘NEW’ Built-in T-Joint is manufactured from a special lightweight plastic combined with epoxy resin and foaming agent that enhances quality and performance by increasing the stability of the shuttle on the string bed and through the air.

The new shape allows the shaft to flex, which ensures the maximum effect of “Namd[1](more flex and faster kick-back graphite material)” and stabilizes the racquet face by preventing the shaft twisting, increasing control